Dog Man: Mothering Heights
Sarah Hatoff (aka Purse Lady) is a supporting character in the series. She is an Australian news reporter who appears in all ten Dog Man books. She is considered the world's best reporter. She is Zuzu's owner as of Dog Man Unleashed. She is friends with Dog Man, Lil' Petey, Chief, and Yolay Caprese. Sarah Hatoff is also a great reporter on the News channel. At the end in Brawl of the Wild, For Whom The Ball Rolls, and Fetch-22, there is a news blog that has all the stuff she found out that was now sent to everyone’s mobile phones. It is unknown why it doesn't appear post-Grime and Punishment. Sarah is also brave and loyal and has a good heart, and she is always willing to help her friends. She likes her job, fight crime, and do karate as shown that Sarah attacks crud (grampa). She is portrayed by Yolay Caprese in The Dog-Man.

Official Description (Can be found in Mothering Heights)

An investigative journalist/blogger who fights injustice wherever it lurks. She's an immigrant from Australia and has a pet poodle.

Hatoff makes her debut as a minor character (just for book 1).

She appears as a news reporter in Chapter Four of the first book. She does a news video about Petey trapping all of the dogs in the city and trying to crush them with his Mutt-Masher 2000. She ends up saying, "How could things get any worse?", to which upon saying this the weenies' leader replies, "I'll tell you how!"

Sarah first appears in the second book entering Penelope's Pets to buy Zuzu. She later investigates The Mysterious Stranger's robbery of plastic treasure chests, and a main character in the book. She later accompanies Chief and Dog Man to stop Flippy. 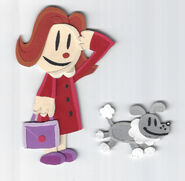