Dog Man: Fetch-22
Sam E. Hamilton is found in Dog Man and Cat Kid in Gassy Behemoth Studios preparing for the Dog Man movie, even though Dog Man & Cat Kid was a book. However, this didn't stop a REAL Dog Man Movie from coming to theaters, the same year Dav released an official trailer for the book. However (again), that was low animated and Gassy Behemoth Studios was the size of Supa-Mecha Philly, after everything in the studio is destroyed and every actor in the studio leaving, Sam went of to find Li'l Petey and Dog Man telling them to keep everything they stole from the studio, because he is worried that he is going to get busted by people, and they have to make him clean the studio up.

He was seen again in Dog Man: Fetch-22, working at Gassy Behemoth Studios, which now became a TV studio, where he wanted to have a chat to Fair Fairy about what a bad fairy she is, the Fair Fairy keeps on calling him Larry which he does not like and finally after criticizing the Fair Fairy, she ended up calling him bald, causing Sam to instantly firing her. 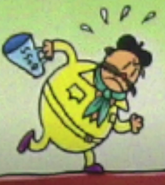 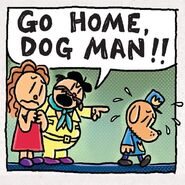