Dog Man: Lord of the FLEAS

Dog Man: For Whom the Ball Rolls
Piggy is the main antagonist of "Dog Man: Lord of the FLEAS". He is the leader of the FLEAS

According to the notes from Lord of the Fleas, Piggy is based on Piggy, the protagonist Lord of the Flies (but the good version who was a human). He is also the leader of the “FLEAS” (Fuzzy, Little, Evil, Animal, Squad) making him naturally bossy and demanding. He doesn’t really care at all about the well being of his allies, making him have a personality of pure selfishness.

Not much is known if he was always this way in the past, but in Dog Man: Lord of the Fleas, it does seem like he was a good person as a kid.

Book 5: Lord of the FLEAS

Piggy and his assistants Crunky and Bub make their debut. Petey goes to see a guidance counselor, but it turns out to be Piggy in disguise. Piggy reveals the plans and laughs uncontrollably. Later, they attack with their The Robo-Brontosaurus but are foiled. They are shrunk to the size of fleas and escape in Dog Man's fur.

Book 6: Brawl of the Wild

The fleas return when they shrink Petey's giant robot with a shrink ray left behind. They wreak havoc but are ultimately defeated. They escape, but this time in Petey's fur.

Book 7: For Whom the Ball Rolls

In their third book, the fleas want to hypnotize Petey to do their evil bidding, but a hug with Big Jim switches their patients. They hypnotize Big Jim anyway, turning him into Commander Cupcake. Crunky and Bub overthrow Piggy by having Big Jim flick him out the window. Piggy gets stuck with Daryl the Moth. Piggy nevertheless wreaks havoc when he steals the Hope Diamond Mood Ring using Daryl as a tool. This plan also gets thwarted when Daryl goes after Uncle Larry (Petey's Ratterfly). Piggy goes flying and Big Jim catches him, sending him to prison. It is theorized that Piggy may return in a future book.

He was supposed to be in Dog Man: Mothering Heights, but the idea got scrapped because it "wasn't a good plot for the title."

Piggy remains undefeated after 4 books, leaving people to wonder "what will happen next?".

Not known if he will come back in Dog Man 11. 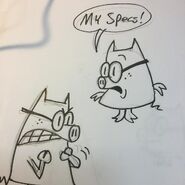 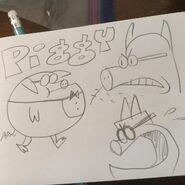 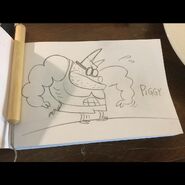 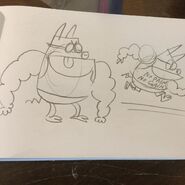