First mentioned in Dog Man: For Whom the Ball Rolls

Petey's Mother is a minor character in the Dog Man series. This is Li'l Petey's Grandmother and was first mentioned in for whom the balls, however we get more information on her in grime and punishemnt and the entire plot

She is a calico cat with orange and black spots.

Petey's mother was abandoned by Grampa after she fell ill with an unknown sickness. She later died from this illness. This may have contributed to Petey becoming evil. She was kind to Petey, and Petey loved her. Petey finds it upsetting to talk about her, and he leaves flowers on her grave. She has a physical debut in a flashback in Dog Man: Mothering Heights, where Petey explains to Sarah Hatoff in a interview how her love affected him. She and Petey moved to Happy Home Shelter when Grampa abandoned them, as they didn’t have much money or food (possibly Petey's dad had a job and divorced). She always forgave Petey whenever he did something bad. Although Petey’s Mother died, her love still survived. And soon the events of A Tale of Two Kitties, when Petey accidentally created Li'l Petey, his mom's love became something new.

Before Dog Man, she was very kind to Petey. Grampa left and she fell ill, and later died. She played the ukulele, and when she died due to the sickness, she passed it on to Petey.

For Whom the Ball Rolls

Petey's Mom was first mentioned in For Whom the Ball Rolls. When Petey first mentions his father, he said that the former abandoned his mother and himself, leaving them all alone.

She is mentioned more often in this book than in previous books of the series. Petey explains to Li'l Petey that Grampa left when she was sick.

As Petey explains through a flashback, he and his mom had to go to a shelter, as she was sick and Grampa had already left. They didn't have much money and food, but she did all she could do to raise her son. Petey usually got mad and broke things, but his mother knew that it was hard for him too, and forgave him. Though, because she was sick, she passed away. Later on, in the middle of Petey's life of crime, his mom's love was reborn, through Li'l Petey. In the very end of the book, Li'l Petey found her Ukulele, followed by Petey saying that he thought he lost it, but he had it all along.

Petey and Li'l Petey at her grave 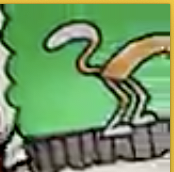 The trailer shows that she has a round tail.

peteys mom as seen in how 2 draw 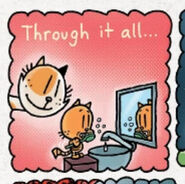 petey brushing his teeth with his mom 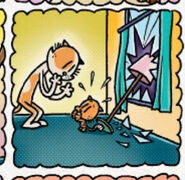 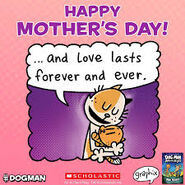