The New Mayor is the character that appears in the first Dog Man book, later making a cameo in Dog Man: Fetch-22 and the former tertiary antagonist of Dog Man: Grime and Punishment. He has a little stuffed bear named Mr. Snookums. Like the old Mayor, his name is Mayor.

After the evil mayor is arrested, he appears to the cops a week later and ready to appoint a new chief. But Dog Man snatches the chief hat, and brings it to Chief, as he and cops follow him around town. Dog Man gets him and Chief to shake hands as a sign that Chief gets back his job.

He appears in Chapter 7 to tell Flippy he's free after Li'l Petey's observations about the Supa Brain Dots.

He is more mean, unkind and rude than in past books for an unknown reason. First, he mayor awards Chief for being the best chief in town, when Dog Man knocks down city hall and he fires Dog Man from the police force. He later comes back to C.O.P.S and hires Cat Man, who was Dog Man disguised as a cat. When Dog Man captures Grampa, Mayor finds out that it's really Dog Man after Grampa swings him around. Mayor arrests Chief, Sarah, and Zuzu for helping Dog Man, and they are driven to the jail. Later when they all escape, Mayor is about to arrest them again, when his house catches on fire. The mayor runs into the burning house to get Mr. Snookums, but Dog Man jumps in and saves the mayor from certain death. The mayor gets mad at Dog Man for leaving Mr. Snookums, but Dog Man barfs Mr. Snookums out. The mayor is so happy, that he re-hires Dog Man.

Even though he doesn't appear here, he makes a new rose garden for people to get in. Yet, Dog Man grabs one rose to give to Genie S. Lady.

Most or all of the pictures are from Dog Man: Grime and Punishment, so please try to add more pages if you can. 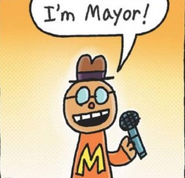 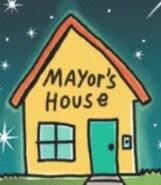