Molly is a supporting Dog Man character who appears in Fetch-22, Grime and Punishment, and Mothering Heights. She also appears in Cat Kid Comic Club as a deuteragonist.

An amphibious kid with a heart of gold and a propensity for silliness. She can fly and can move stuff with her brain.

She is very kind and silly. However, she can be stubborn and annoying, though only occasionally. She also doesn't seem to understand sarcasm, as shown in Mothering Heights.

Molly's appearance is of an average tadpole with mind powers and a mouth, colored a pale green.

Molly's birth mother is unknown, but when the Fair Fairy came, she assumed she was her mom. Eventually, when the Fair Fairy tried to get her and the other 22 tadpoles to stop calling her "Mommy", Dog Man accidentally sent a wagon full of all the Supa Brain Dots in the city rolling down a hill and into the pond. The Supa Brain Dots then gives Molly and the other tadpoles mind powers. The Fair Fairy teams up with them to take over the city, because the Supa Brain Dots also made Molly and the Tadpoles evil, too. Later in the book, she meets Cat Kid, who tries to get her to not be evil by befriending her. Molly then agrees to be friends, and becomes good from that point onward, and even joins Cat Kid's Comic Club.

She appears later in the book, being taught adverbs alongside her siblings. She helps Li'l Petey, 80-HD, and her siblings draw on Munchy and scare him away. She subsequently saves Dog Man, Chief, Sarah, and Zuzu along with Flippy.

Molly first appears visiting Li'l Petey during Petey's interview, and they sing parody songs about poop, much to Petey's chagrin. After one of the two evil sippy cups swallows Sarah, her cameraman, Petey, Li'l Petey, and herself, she flies outside and yells at it, asking it to let go of her friends, with no avail. She attacked the first one with her good vibes power, but the other splashed her with apple juice, sending her crashing into a broken Petey and Son. She takes the remains of a robot made by Petey, and repurposes it into a robot suit she titles Mecha Molly. She uses this robot suit to destroy the evil sippy cups and save everyone trapped within them. She is last seen flying away from the remains of Petey's lab, overjoyed when Petey reluctantly allowed her to keep the suit. 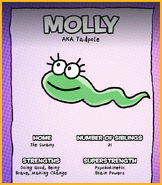