Mayor is one of the two secondary antagonists in Dog Man (alongside the Leader Hot Dog). She is evil. New Mayor. She also worked with Dr. Scum to build Robo-Chief to take over the city and turn it into criminal territory, who appeared in Chapter 2: Robo-Chief as one of the two main antagonists (alongside Petey). Her plan backfired when Petey destroyed Robo-Chief with a corkscrew slide. After Petey is caught by Dog Man, Mayor's true self is exposed by Dog Man (he was projecting video evidence) in the middle of a Cop Awards ceremony and she goes to Mayor Jail for the rest of her life and gets replaced by New Mayor. 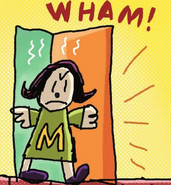