After discovering how his powers worked, Flippy cut out a hole in a paper bag, stole a purple trench coat and an orange, three-legged stool with black stripes from Chief to dress himself up as a human, becoming the Mysterious Stranger. He robbed Penelope's Pets, tied up Sarah Hatoff, Zuzu, and two Penelope's Pets workers, and then he stole a bunch of little plastic treasure chests, planning to get enough gold to purchase the biggest castle in the city. Fortunately, Zuzu chewed through the ropes and Sarah snaped a picture of the Mysterious Stranger. She thought he was Petey the Cat, because the orange-and-black-striped-stool looked like his tail and legs, and she posted it on her news blog. The news reached Petey at Cat Jail, and he gets enraged because he thought someone was walking around as him, so he escaped Cat Jail, using a Flat Petey (which Witch Doctor Boog. E. Feeva brought to life later in the story) as a distraction and built the Treasure Tank 2000 in his lab so he can catch his so-called "impostor".

Meanwhile, Flippy the Mysterious Stranger was still up to no good. However, he didn't know that the treasure chests he stole from Penelope's Pets were actually made out of plastic, until he tries to pay them at Kinney's real estate. The owner explained to him that treasure chests are made out of wood and filled with gold. Just then, both of them noticed on television that Petey the Cat on his Treasure Tank 2000 was hypnotizing people with his love ray to take everyone's money. The Mysterious Stranger decided to go and steal it, whereas the owner declined. The stranger grew mad and used his mind powers to send the owner flying away.

Dog Man shows up with Sarah, Zuzu, and Chief, just in time to see Petey, Flat Petey and the Mysterious Stranger (Flippy) arguing over the Treasure Tank 2000. Petey is chased back to Cat Jail as Flippy reveals who he is. As he was about to go and steal the Treasure Tank 2000, he realized too late that Flat Petey and the hypnotized Dr.Feeva had already escaped with it to the top of a snowy mountain while Flippy was speaking to Dog Man and the others. The evil fish chased Petey's paper clone out of rage, with Dog Man and everyone else following the villains to the top. Flippy freezes in his fish tank, but as Flat Petey sees Dr Boog. E Feeva no longer useful and kicks him away, the doctor's belongings fall out of his bag. Flippy quickly reads one of the Witch Doctor's books and discovers how to live forever. Focusing his mind, Flippy's soul abandons his body and tries to possess Chief's body. Dog Man gets Flippy's soul in his mouth, and Flippy's soul slowly melts away until it was no more. His empty body is left to freeze on the mountain when Dog Man, Zuzu, Sarah, Chief and Boog. E Feeva use Flat Petey's frozen body to sled down the mountain.

Flippy's frozen body is recovered from the mountain by scientists to study his brain. He is rebuilt with metal parts and brought back to life with Living Spray, becoming Supa Mecha Flippy. He makes an army of Beastly Buildings and goes on an evil rampage in the city. Dog Man crushes several of the Beastly Buildings with the help of Sarah, Zuzu, and Chief. After Li'l Petey (in Robo-Suit Mode) destroys the rest of the buildings, Flippy vows to get rid of him by tossing him into a volcano. Petey takes Li'l Petey's place as the robo-cat in an attempt to save the latter, unbeknownst to Flippy. Flippy becomes a good guy when Li'l Petey - no longer in Robo-Suit Mode - befriends him, and Flippy goes to Fish Jail for his crimes, but he and Li'l Petey promise to be pen pals, and to make comics for each other.

Dog Man: For Whom the Ball Rolls

Flippy makes a cameo when Li'l Petey shows Grampa a book he is making for him.

Thanks to Li'l Petey's help, Flippy gets released from jail, and even aids the main cast in fighting the Fair Fairy and the 22 Tadpoles. He later became the 22 tadpoles' adoptive father.

He was teaching the frogs about adverbs, but was taken by Munchy. He was later freed by the 21 frogs.

Flippy in this book was very overprotective, and was overwhelmed by the fact that the 21 frogs were making books about potty humor, gore, and death. He realized at a point that he needed to calm down a bit, and approaches the tadpoles saying that they can write what they want write about, and all he needs to do is chill out! 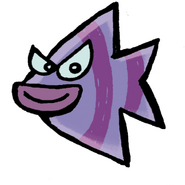