Dog Man and Cat Kid is the fourth book in the Dog Man series. The release date was December 26, 2017. It was written and illustrated by Dav Pilkey and colored by Jose Garibaldi.

Hot diggity dog! Dog Man is back -- and this time he's not alone. The heroic hound with a real nose for justice now has a furry feline sidekick, and together they have a mystery to sniff out! When a new kitty sitter arrives and a glamorous movie starlet goes missing, it's up to Dog Man and Cat Kid to save the day! Will these heroes stay hot on the trail, or will Petey, the World's Most Evil Cat, send them barking up the wrong tree?

Dog Man - Behind The Scenes

George and Harold are in fifth grade, and are now reading East of Eden, which inspired them to create a new Dog Man book.

One morning at the doghouse, Li'l Petey is fixing 80-HD, while Dog Man gets a phone call from Chief, telling him he's late to work and demands him to get there now. Suddenly, a lady stops by at Dog Man's doghouse. The lady happens to be Mrs. Suspicionflame, the world's greatest babysitter. The sitter says she specializes in cat-sitting and can start today.

While Dog Man leaves for work, Li'l Petey mistakes Mrs. Suspicionflame as his papa. The lady says she is not his papa. She says she can sing songs about how much fun it is to clean up his room and stuff. Lil' Petey demands her to prove it and sing to him.

While Mrs. Suspicionflame sings, Lil Petey removes the wig off her head, revealing that Mrs. Suspicionflame is actually Petey in disguise and continues to fix 80-HD. Petey discovers that 80-HD has solar panels and no missiles. LP explains that 80-HD doesn't need missiles, because he thinks 80-HD is his friend, but Petey claims that 80-HD is not his friend. 80-HD obeys Li'l Petey, but it doesn't mean it his friend, Petey states. Petey wants to have a talk with Li'l Petey, and he'll buy him some ice cream.

Meanwhile at the Police Station, Chief is meeting with Sam E. Hamilton. They are both waiting for Dog Man to come. Sam asks Chief if Dog Man is always late. Chief tells him that he's a maverick, but always gets the job done. Finally, Dog Man comes and jumps on Chief. Chief yells at Dog Man about why do they have to go though this every day. Chief introduces Sam to Dog Man and tells him that Sam's studio 'Gassy Behemoth Studios' is going to make a movie based on him. Sam pulls out a poster to 'The Dog Man'. Dog Man eats the poster, Chief tries to stop him. Dog Man tears the poster apart. Sam exclaims that Dog Man is an idiot, but Chief points out that he's the best cop they have.

Petey (now as Mrs. Suspicionflame) and Lil Petey leave the doghouse for some ice cream. 80-HD wants to come along, but Petey warns him to stay. Ten minutes later, Lil Petey buys an ice cream. Petey apologizes for tricking his son with his disguise, and explains that the cops are looking everywhere for him and might throw him in jail and now he has no one to help. Lil Petey promises to help his papa. Petey is about to train him to be evil, to which Lil Petey denies. He even doesn't notice that he's breaking laws, until he reaches a trash can with a sign reading "Please don't litter".

Chapter 4: An Aching Kind of Growing

Petey is trying to make his son turn evil, and Sarah reports the first shooting of The Dog-Man. Then come Ding-Dong Magoo as Dog Man, Yolay Caprese as Sarah, Samson J. Johnson as "Chief", and Scooter McRibs as Petey. The Crew shows Mrs. Suspicionflame and Sarah, and Lil' Petey and Zuzu around. Mrs. Suspicionflame (Petey), had made Sarah look out to steal the remote after the guy leaves for lunch. Petey dumped the old lady disguise and created a really evil costume for him and Lil' Petey. That was the origin of "Cat Kid".

This is the first shooting of "The Dog-Man". It went horrible. First Dog Man (Original) videobombing the romantic, big action, and even PETEY's big scenes in the movie. Now Ding-Dong Magoo trips and loses his mask from a sleeping Dog Man, and Sam E. Hamilton picks up Dog Man's ears, and yells in them. "HEY!!!" He says. When he wanted Dog Man to apologize to Ding-Dong, he instead licks him in the mouth! "Dog Man, you're fired." Yolay asks what's going on, but Sam told her everything that happened. Dog Man goes home.

Dog Man Runs to the cop station behind the plant avoiding Chief, who thinks Dog Man will jump on him. The 2 Cops ask Dog Man what's going on and why he was behind the plant. Chief felt sorry and told the cops to go home. When Dog Man is home, he recognized Lil' Petey was missing. When he asked 80-HD where he was, He was with Mrs Suspicionflame! 80-HD erased her and it was PETEY! Dog Man and 80-HD go, but 80-HD was on command, and was forced to stay home from Lil' Petey. Dog Man went to Sarah, and told her in 1 word that the nanny was PETEY! But the guard sees them and says Dog Man was banned. Dog Man tries digging a hole, but ends in the wrong spot. The Guard was being mean, and wanted to take Dog Man, but he zips away and the Guard bad-talks Dog Man. Eventually, Dog Man kicks Guard in the hole and changes to "The Bark Knight".

Chapter 7: A Buncha Stuff That Happened Next

Petey talks Lil' Petey to help him shut the movie down. Lil' Petey called himself "Cat Kid" when Petey called him "Kid". Lil' Petey says that they're Pretend, and Petey says they are, so he could trick Lil' Petey. They climb the Ladder, and Petey sets a trap for Yolay Caprese.As Sam re-shoots the Big Action Scene, he asks if everything is ready, everything was, but the Eden guy lost the controller. "HOW CAN THINGS GET ANY WORSE???". Well, Things got worse. Dog Man stole the Dogmobile, and made a hole in the studio. Dog Man gets the Dogmobile instructions, and loses them. He presses all the controlls, and it makes him go crazy. The Guard got outta the hole. And he almost got killed, but he jumped in the hole just in time. Meanwhile, Sam lost EVERYTHING! A HOLE, CONTROLLER, AND DOGMOBILE!!!!!!!!! Then Yolay falls in Petey's Trap. Lil' Petey doesn't wanna hurt her, and Petey asks him to cut him down when he changes the sign to "Thoughtless Mayhem is Best". Then Dog Man breaks in the studio with the dogmobile. The Sign changes to Thou Mayest. When Petey and Lil' Petey argue, Lil' Petey jumps away, and grabs a motorcycle and a helmet. When he sees Yolay and Dog Man are in trouble, he runs to the exit, and opens the door slamming in the Guard's face BAM!!!! He runs up the Dino and catches Dog Man and Yolay and saves them. "HOORAY FOR CAT KID!!!"

Every actor except Yolay had quit, and slammed the door on the GUARD. Sam was RUINED. Petey had an idea to turn the remote on the Weenies and make them evil. The Weenies made 4 smaller holes in the studio and wanted to destroy the city. When all of a sudden, Yolay thinks that the weenies are cutie Pies. The Weenies came up with attacks on The Bark-Knight, Cat Kid and Yolay. She wants to fight, but when The Weenieleader says they're outnumbered, and they're robots so Dog Man can't eat them. but all of a sudden, Sarah (Purse Lady), Zuzu (Supa-Fang), and Chief (Chief Man) had came. The Weenie said they're the dumbest superheroes ever, and it made Purse Lady Mad! She wackt the Weenie and took his brain out! The Weenies gave up and ran. When Petey sees the Weenies run, he had one final plan, to use the Philly Robot, and wants to go to Cannery grow with the Dippy Dummy.

When Petey went to the Cannery Grow, he finds Dippy working there and he shout for a cannery grow. Dippy has trouble counting from 1 to 10 because during the first book, Petey made the words of the books disappear and it made Dippy brainless. Petey yells at her to hurry up and it made Dippy lose count and she had to start all over. 22 minutes Dippy finally got to 10 and Petey was so tired. He asked for a cannery grow, but Dippy asked him 3 questions and Petey kept yelling "No!" and yelled at Dippy. Dippy told Petey that he was not a very nice guy and that she was doing her job. Then it made her sad that she said "All I wanted to do was help you." When she started crying she said "I tried my best but..." She started blubbering sadly " Ya didn't have to be so mean!" "All ya had to do was ask nicely" "I Have feelings ya know." Petey aplogizes and asks nicely for a cannery grow and Dippy tells him dumbly that they are closed. Petey took one of them rudely which makes Dippy want to call 9-1-1. But she never succeeds.

The Guard was now trapped in the hole. Petey now uses his the remote he stole in Chapter 4 to make Supa-Mecha-Philly evil. Petey had captured everyone using Supa-Mecha Philly. Cat Kid and the others fight, but Petey captures them all. Cat Kid runs away to get 80-HD, and when he thinks about how 80-HD is just obeying him, he makes him choose his own path. But 80-HD runs outta power, because in the first chapter, Lil' Petey used Solar panels instead of atomic batteries. Philly kicks 80-HD away, which made Lil' Petey cry for Hours. Eventually, 80-HD flew around the world and sliced Supa-Mecha Philly in half.

It is revealed that during the time 80-HD was away, he went halfway around the world to Japan (where it was morning) and gained solar power from the sun. So 80-HD flew back to his friends and sliced Supa-Mecha-Philly in half.

Once there, Li'l Petey wants a place in the house to store the stuff. Dog Man leads everyone to the elevator and lets Li'l Petey press the button. Surprised that there is a Grand Ballroom, he presses that, and soon, they are greeted by a room filled with balls. They worked and played until it was bedtime. 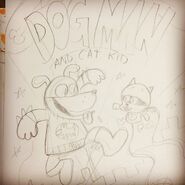 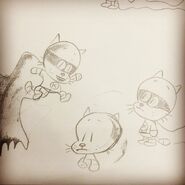 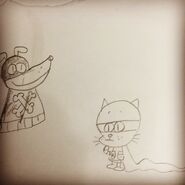 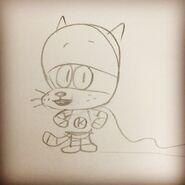 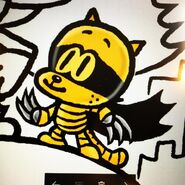 From the creator of Captain Underpants, Dog Man is back! Part dog, part man, and all hero! With Li'l Petey by his side, Dog Man must sniff out a cunning kitty sitter, wallop mecha-weenies gone mad, and rescue a movie star! Can the daring duo save the day? Or will Petey the world's most evil cat, send them barking on the wrong tree?