Dog Man Wikia
Register
Don't have an account?
Sign In
in: Musicals, Dog Man: The Musical, Featured article of the month, 2019

2019 Off-Broadway
2019 North American Tour
Dog Man: The Musical is a production based on the worldwide bestselling series from Dav Pilkey, the creator of Captain Underpants.

Best buds George and Harold have been creating comics for years, but now that they’re in 5th grade, they figure it's time to level up and write a musical based on their favorite character, Dog Man, the crime-biting sensation who is part dog, part man, and ALL HERO!! How hard could it be?

With the head of a dog and the body of a policeman, Dog Man loves to fight crime and chew on the furniture. But while trying his best to be a good boy, can he save the city from Flippy the cyborg fish and his army of Beasty Buildings? Can he catch Petey, the world’s most evil cat, who has cloned himself to exact revenge on the doggy do-gooder? And will George and Harold finish their show before lunchtime?? Find out in this epic musical adventure featuring the hilarity and heart of Dav Pilkey’s beloved characters.

The musical opens with George and Harold in their tree house thinking about their comic book Dog Man, and how they are in fifth grade. They think that they should level up and write a musical. The musical transitions to the city, and the people all happy in the city, with cops bringing robbers to justice except Petey, the world's most evilest cat ("The Opening Number").

Officer Knight, a strong cop, and Greg the Dog, a smart canine give the police Chief a butterfly fish named Flippy, and Supa Brain Dots because he is "very forgetful". That makes Chief mad. He puts away the Supa Brain Dots, and they fall into Flippy’s bowl... Officer Knight wonders if they could make Chief proud. Meanwhile, Petey is worried about Knight and Greg, together they could defeat. Petey spots Knight and Greg walking, and decides to kill them both with a bomb. Knight spots the bomb, and thinks that it would make Chief proud to defuse the bomb. Knight asks which wire to cut, Greg says to cut the green one, due to him being colorblind. The bomb explodes.

They arrive unconscious at the hospital, and Dr. Dookie, the Nurse, and the Surgeon discover that Knight's head is dying, and Greg's body is dying. The Nurse says that they should sew Knight’s head onto Greg’s body. Dr. Dookie accepts, and Dog Man is born ("Dog Man"). Dog Man captures Petey straight into Cat Jail. Flippy comes as a super brained fish. Dog Man chases Flippy up a cold mountain, and that freezes Flippy, dead in the fishbowl. Chief is happy, but Dog Man dances with him, which is really annoying for him. At Cat Jail, Petey is plotting to escape. Today is Big Jim's birthday, and the warden gave him balloons ("Revenge"). Petey escapes by floating away with Big Jim's balloons, and arrives in his lab. He decides to clone himself, but instead finds Lil' Petey, A good hearted young clone.

Back at C.O.P.S, Chief asks Dog Man to protect Flippy, who is being put under scientific research. Dog Man arrives at the center. At the center is Dr. Dookie, the nurse, the surgeon, and Sarah Hatoff, a star reporter. Sarah is worried that Dog Man will roll around in Flippy's dead body. Dog Man does so, causing the scientists to get really mad. The nurse suddenly says that they should "replace his smushed bones with bionics", and Dr. Dookie accepts again, and Supa-Mecha Flippy is born ("Cyber-Fish"). They leave Dog Man to guard Flippy, but a bird takes Flippy away, and he runs away in shame back to C.O.P.S.

In Petey's Secret Lab, Petey is working on a new robot named 80-HD, while Lil' Petey is singing a really annoying song ("Happy Song / 80-HD"). Petey gets fed up, and decides to give Lil' Petey away. The giveaway becomes a failure, and he abandons Lil' Petey. Lil' Petey walks with his crate sadly, and falls asleep on the doorstep of C.O.P.S. That evening, when Chief arrives again at C.O.P.S, Dog Man dances with him joyfully. Chief gets angry and sends him out for the night. Dog Man finds Lil' Petey and decides that he should give him away to someone. However, everyone who wants him would hurt Lil' Petey. Dog Man decides that he will adopt Lil' Petey ("The Perfect Mashup").

At Petey's secret lab, Petey is happy to have Lil' Petey gone. But soon he realizes that he loves Lil' Petey ("Without Me"). He sends 80-HD to find Lil' Petey, and bring him back to the lab. 80-HD takes Lil' Petey out of Dog Man's house and runs away. In the morning, Dog Man discovers that Lil' Petey is gone, and sets out to search for him with Chief. They put "Lost Kitty" posters all over the city. While making posters, they run past the living spray factory, where the bird that took Flippy, drops Flippy down into the building. Flippy comes out, but something is new- he's alive! The living spray gas spreads, and makes an army of Beasty Buildings, living monster buildings that obey Flippy. Flippy and his Beasty Buildings march towards the city, for revenge ("I'm Back").

Back at Petey's secret lab, Petey is happy to have Lil' Petey home. Lil' Petey wakes up to find Dog Man gone, but that doesn't matter to him. Lil' Petey just keeps on blabbing on about Dog Man, and drives Petey crazy. Petey decides to teach him some ABC's but however, they have to do with evil things. But Lil' Petey keeps on interrupting him about Dog Man, which makes it a complete failure ("The Evil ABC's"). Petey decides to try again, by showing his new robot, 80-HD, in robo-suit mode. He wants Lil' Petey to use it for evil, but instead Lil' Petey plays with it happily ("Robo-Dance Party").

In the city, Chief and Dog Man discover the Beasty Buildings coming towards them. Dog Man has an idea though, he rides a French Dressing truck and pours it over the road. That causes a lot of the buildings to slip, and break. Flippy gets angry and sends all the Beasty Buildings after them. Meanwhile, in Petey's secret lab, Lil' Petey is still partying with 80-HD, when he hears Dog Man cry for help. Lil' Petey runs out of the lab to save him, while Petey runs after him shouting "Wait! We're supposed to be the bad guys!". Dog Man and Chief are cornered, until Lil' Petey destroys all the buildings, and saves the day ("Dog Man is Go!").

Flippy, angry about the destruction of his Beasty Buildings, and throws Lil' Petey out of his sight. Petey and the others run quickly to save him. They arrive, finding 80-HD broken, and Lil' Petey in the robo-suit, still alive. Petey decides that he will go into the robo-suit and save Lil' Petey by sacrificing himself ("A Far, Far, Better Thing"). They quickly run away, then Flippy finds Petey and decides to drop him into the volcano near the city.

Meanwhile, the others hide in an art store saying "there is nothing we can do". However, Lil' Petey takes some paper and crayons, and makes a book for Flippy. Lil' Petey runs towards Flippy and keeps asking him "Why?" until he finds out that no one liked Flippy, and everyone bullied him. Lil' Petey gives him the book called My Friend Flippy. That softens Flippy's heart, and makes his evil mind powers leave. But that leaves Petey falling into the volcano. Dog Man needs to act fast, and he takes a hang glider and runs offstage. Meanwhile, Petey is nearing the edge of the volcano until Dog Man saves him ("A Far, Far, Better Reprise")! Flippy has to go to Fish Jail, but Flippy says he'll be happy in prison. Petey has to go back to Cat Jail, but he decides he will try to be a "better cat". George and Harold decide to end their show, and it's the happiest end ever. But Petey escapes again ("The Happy Ending")!

The musical was announced in early 2018, and production began in late 2018. The show began on June 28, 2019 at the Lucille Lortel Theatre, NYC. It was set to end on August 4th, but its run was extended to August 11. It was a successful show, and received very positive reviews from critics. Laurel Graeber from The New York Times reviewed that "You have to love a family show that makes adults laugh, too.", making it a New York Times Critic's Pick. Dan Rubins from Theatre is Easy reviewed "It’s a show that can serve as a delightful entry point into musicals for its youngest audiences." The production was nominated for Off-Broadway Alliance Award for Best Family Musical

The US tour started on September 27, 2019. The show mostly toured to school groups in USA and Canada. However, in the school touring, there was no intermission between acts. The show first came to theaters when it played at Queens Theatre, NYC on January 10, 2020 and had 5 performances. Usually there would be normal performances, and non-sensory performances, which was more silent and quiet. Currently, all shows are cancelled or postponed due to the Coronavirus pandemic. The musical features alternating casts, including Milo J. Marami, who was part of the ensemble in the original Off-Broadway performance.

Differences from the book 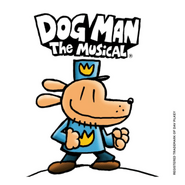 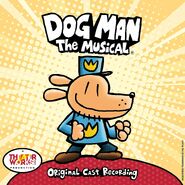 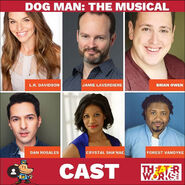 The Original Cast Rehearsing (above, and next 13)

Opening at the Lucille Lortel Theatre 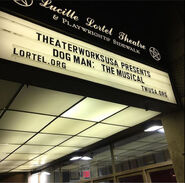 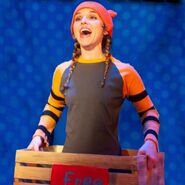 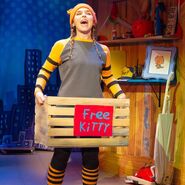 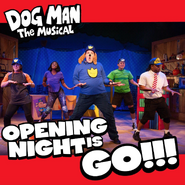 Advertisement for the original Off-Broadway production (above and next 8) 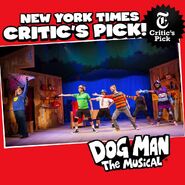 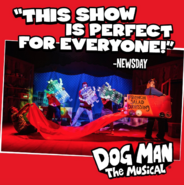 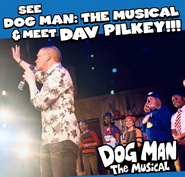 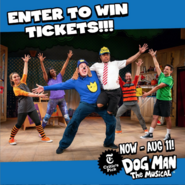 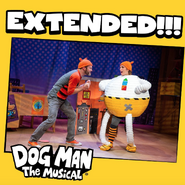 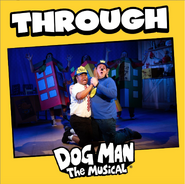 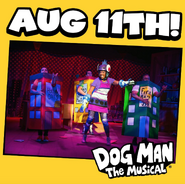 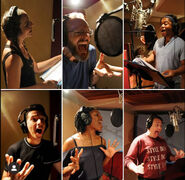 The Original Cast recording the album 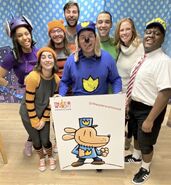 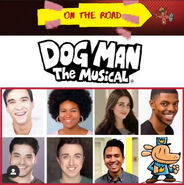 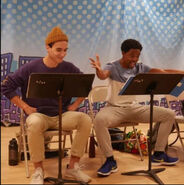 Tour Cast Rehearsing (above, and next 6) 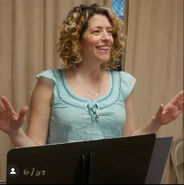 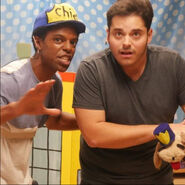 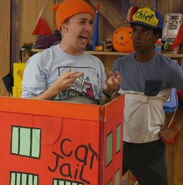 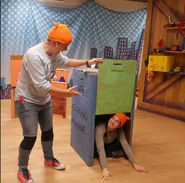 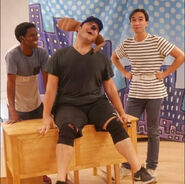 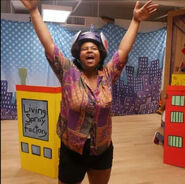 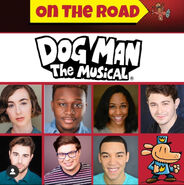 Dog Man The Musical
The original cast performs highlights from the musical including "Happy Song / 80-HD", "The Perfect Mashup", "Robo-Dance Party" and "The Happy Ending".