Dog Man: Mothering Heights is the 10th book in the Dog Man series. This book was released on March 23, 2021.

The title plays A pun on "Wuthering Heights" by Emily Brontë from 1939.

Dog Man is down on his luck, Petey confronts his not so purr-fect past, and Grampa is up to no good! The world is spinning out of control as new villains spill into town. Everything seems dark and full of despair. But hope is not lost! Can the incredible power of love save the day?

A special 2-page look at the cast, reciting their biographies, strength and weaknesses, indexed with their mugshots.

Chapter 1: The Line of Duty

Chapter 2: The Cone of Shame

Chief is very surprised that Dog Man is wearing a cone. He takes Dog Man home, and Nurse Lady says she notices (and likes) Chief's slippers. Chief is happy (although, his expression looks like he has a crush on Nurse Lady). Chief leaves, and Dog Man describes how the day went to Li'l Petey and 80-HD. Both try to assure him that everything is gonna be okay and leave the "Supa Pillow Fort." They then go up to the grand ballroom.

Grampa tries to escape from Cat Jail using the Cupcake Exit, but Big Jim has installed a security mechanism so Grampa can't get through. Big Jim claims only his cardboard robot can escape. Grampa then claims that it needs a battery. Big Jim runs up to get the battery, while Grampa climbs into Big Jim's robot.

Li'l Petey and 80-HD are inventing a new Mecha-Cone Suit for Dog Man. They return to the Supa Pillow Fort and take off the old cone from Dog Man and replace it with a new one. Dog Man is happy with the new cone, and Li'l Petey dubs it "The Cone of Destiny". Li'l Petey tells Dog Man if he ever needs help, just press the button on the top, and all of his dreams will come true. Dog Man rushes out of the house to the police station, knocking over Petey who has come to pick Li'l Petey up for the week. Petey takes Li'l Petey and 80-HD to his lab, telling the latter the he needs to fix the damage he caused in Grime and Punishment.

Chapter 5: Bring on the Bullies

Dog Man arrives at the police station and the Mean Officers start bullying him because of his cone. Dog Man presses the button on the top, which causes him to change into his Mecha-Suit. The mean officers run away in fright after this encounter, and they hide behind the plant Dog Man usually hides behind. Dog Man turns off the Mecha-Suit and discovers that Chief is writing a love letter to Nurse Lady. Dog Man doesn't like the letter, and expresses this by blowing a raspberry. Chief crumples it up and throws it away and admits that he'll always be alone. Dog Man then comforts Chief after realizing what he's done.

Big Jim returns with batteries from Grampa's alarm clock. Grampa made a note that he "escaped" while Big Jim was getting the batteries. After tossing two batteries into the head of the robot, Big Jim is convinced that the robot came alive. Grampa (disguised as the robot) says that they need Living Spray and Cannery Grow "because cupcakes are delicious forever". They exit through the Cupcake Exit and run off to find the ingredients. Meanwhile, Petey employs 80-HD to fix Petey and Son. Petey gives Li'l Petey a bath, telling him that Sarah is going to interview him on his former villainous life. Suddenly, the doorbell rings, and Li'l Petey jumps out of the bathtub to answer it, causing Petey to clean up the spilled water. Later, Li'l Petey asks Petey if he can have a playdate with Molly, and Petey says no, unbeknownst to the fact that Molly has already arrived. Petey lets Molly and Li'l Petey play downstairs, as long as they don't mess up the interview.

Chapter 7: A Buncha Stuff That Happened Next

Dog Man digs up roses from Mayor's New Garden. He drops them off at the hospital, expecting Nurse Lady to give them to Chief, but she shares them with her patients. Meanwhile, Grampa and Big Jim go from store to store trying to find Living Spray and Cannery Grow, with no avail. When they ask Kinney, he says that Living Spray was banned, and the Cannery Grow factory was destroyed in book 5. Meanwhile, Sarah, her cameraman, and Zuzu arrive at Petey's house where 80-HD is fixing it up. Petey welcomes them, calling Zuzu "little doggy", causing her to growl at him. They begin the interview, but Li'l Petey and Molly interrupt with a parody of "If You're Happy and You Know It". They request a snack, specifically chips. Later, they were thirsty and asked for "chip dip" from Petey. But he don't have any. Molly is upset that Petey does not have any. Instead, he give them fruit juice. Sarah asks Petey why Molly calls him "Wally", to which Petey has no clue.

[Note: The chapter cover is a reference to the book Becoming Michelle Obama.] Grampa and Big Jim try going to Cal and Bunga's Surf Shop for living spray, but to no avail. Sarah interviews Petey when he shows her around his lab. Grampa decides to go steal the living spray from Petey's home. Dog Man tries again to give Nurse Lady a romantic gesture with a box of chocolates but she accepts them for her staff. Petey is interviewed back in his living room, but Sarah does not give him any opening to answer her questions. Molly and Li'l Petey interrupt again with their silly songs because they want apple juice. (Petey offers them cranberry but they refuse). When they leave, they wonder why Petey is grumpy.

Petey takes Sarah and the kids on a walk to continue the interview. Petey tells about his first prison, Jail 4 Cats. He says he could not rehabilitate completely after his time, so he became a villain. Meanwhile, Grampa and Big Jim arrive at Petey's lab, where they greet 80-HD. Grampa goes downstairs but slips on the sippy cups that contained the apple juice that Lil Petey and Molly received from Petey. He loses his disguise and Big Jim starts defying him, knocking over a can of living spray, which brings the two sippy cups to life. They get hit with growing spray and ultimately destroy Petey and Son.

80-HD finished fixing Petey and his son's home, when the sippy cups destroyed it and 80-HD has to start all over again! The sippy cups are on the loose, and capture Grampa and Big Jim. 80-HD tries to defeat the sippy cups, but one of them squirts at him with apple juice, causing him to fall apart. The malic acid from the apple juice destroys 80-HD. Then, the same sippy cup swallows him. The second sippy cup eats Grandpa and Big Jim. Grampa calls Big Jim "buddy." Big Jim tortures Grampa later on for the rest of the book for this, sparking their argument. Meanwhile, Lil Petey and Molly entertain Sarah with their silly songs, to Petey's chagrin. They use outhouses because they need the bathroom. Petey takes Sarah to where it all began.

Chapter 11: Where It All Began

Petey tells Sarah that he moved to Happy Home Shelter when he was little with his mother, even though they were very poor his mother gave him love. Even after she passed away, Petey felt that love with Li'l Petey and thinks that love can last forever. Sarah ends the show, and can't think of anything going wrong. Then, Sarah, Petey, Li'l Petey and her cameraman are snatched by the sippy cups and Sarah admits that something has gone wrong.

The sippy cups eat the gang, but Molly is still safe. She leaves the mouth of the sippy cup and controls its mind with her psychokinesis. The other sippy cup sprays her, and she finds out about the destruction of Petey and Son and worries that Petey is going to be mad. Meanwhile, Chief and Dog Man have gone through millions of love notes to Nurse Lady at the station, but can't come up with the perfect one. Nurse Lady calls them to the hospital, so they run for her. Chief enters the hospital to save the patients and help Nurse Lady, while Dog Man activates his Cone of Destiny to defeat the sippy cups. While he fights one, the other tries to destroy the hospital. Chief and Nurse Lady try to tickle it, but it swats them with a fly swatter. they are falling, but Dog Man throws them his umbrella and they float gently in the air.

Chapter 13: The Most Romantic Chapter Ever Written

Nurse Lady does not want to hold Chief's hand while they are in the air, but wants to kiss him. They then proceed to kiss in Smooch-O-Rama.

Chapter 14: Meanwhile, Back at the Terrifying Battle...

Dog Man gets swatted into the sippy cup and loses his Cone of Destiny. everyone agrees apple juice is bad. Molly uses the the meerkat robot and turns it into her Mecha Suit with her psychokinesis. With it, she slices up the sippy cups and frees everyone (with some rock/action music from Dippy). Sarah says it was violent. Dog Man takes the last pieces of 80-HD home so they can rebuild him the next day. Chief and Nurse Lady float along the streets on their umbrella. Chief asks Nurse Lady if Dog Man can come with them on their date. Nurse Lady says yes. And so Chief says one of his catchphrases again, "Oh boy, this is gonna be great!"

Chapter 15: The Memory of Love's Refrain

Molly and Li'l Petey talk about Rudolph, Santa, and Batman. Petey is annoyed. At the sight of Petey and Son, Petey is distraught. Molly asks to take the meerkat suit home. Petey sarcastically says yes. Molly believes he isn’t being sarcastic and flies away, Li'l Petey finds Petey's mother's Ukulele, and Petey plays a few notes, because he thought he lost it. Li'l Petey takes Petey to live with him and Dog Man while Petey and Son is rebuilt. Li'l Petey says they still have love and that it lasts forever. Following up with Petey hugging his son and saying: "Forever and ever." The book comes to an end. 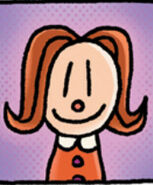 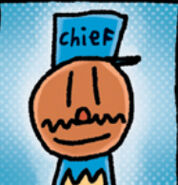 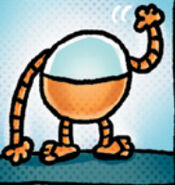 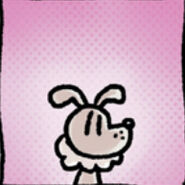 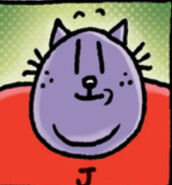 "Dog Man is back! Part dog, Part man, And all hero! This time the heroic hound gets a super new suit! Li'l Petey and Molly can't stop singing silly songs, and Petey reveals how his mom's love changed him. A love that lives on in Li'l Petey. But things take a turn for the worse! When Grampa sets off two sinister sippy cups. Will the Supa Buddies stop the apple juice onslaught in time? Or will all be lost? Not if they remember that love can win! Find out what happens in Dog Man: Mothering Heights!"