Dog Man Grime and Punishment is the ninth book in the Dog Man series. It was released on September 1, 2020.

The Supa Buddies bamboozled the baddies, but all's not right in the world. Dog Man has a new problem to pound, and he's going to need his entire pack to help him. Will he go barking on the wrong tree?

George and Harold: Celebrities at Large

It all starts at the city hall where the mayor congratulates Chief one day. He tries to get Dog Man to award him, but he was playing with his roses. After it was cleared up the mayor gets grime on his shirt and one of the lenses of his glasses crack. He tells Chief that if he messes up again, he'll take away his badge. Then Dog Man gets ahold of his hat and the mayor tries to get it back to him. But it crashes on one of the pillars and the whole building crashes down, with all of them safe. But Dog Man still has his hat and they chase him.

Chapter 2: The Saddest Chapter Ever Written

Chief and Dog Man are at the mayor's house in the middle of the night, and try to comfort him with flowers. Instead the mayor decides to fire Dog Man and takes away his badge, walking away telling his stuffed bear Mr. Snookums how great he is. Dog Man decides to pack up, and soon all the cops begin to cry and flood the building. They all cry, but it wasn't allergies. Chief was REALLY crying. It just breaks my heart... However, the Mean Officers drive Dog Man out and scold him for getting fired. Dog Man then walks sadly out, howling at the moon.

Chapter 3: The Chapter That's Totally Not as Sad as The Last One

Dog Man comes home to Li'l Petey and 80-HD working on a story for Dog Man. Li'l Petey says to 80-HD, "It's our story. We can color it any way we want!". Dog Man tells what happened that night, and Li'l Petey and 80-HD decide to cheer him up with their bedtime story. After Dog Man falls asleep, they both start to work on a new invention. Meanwhile, at Cat Jail, Petey's Father (aka Grampa) is working on a new invention called the motorbrain, that makes you large and very powerful. Big Jim starts to get annoying, and Grampa shouts at him, hurting his feelings. Big Jim cries and Grampa decides to test the motorbrain on him. Big Jim puts the helmet on, and becomes gigantic. He now calls himself "Snug", and starts to cuddle with Grampa. Grampa manages to escape, and falls through the "Hang in There!" poster. Grampa soon discovers that it's an escape tunnel, and smiles evilly.

Chapter 4: The Dog in the Hat

Li'l Petey and 80-HD have done the finishing touches to their new invention: a helmet for Dog Man to be disguised as "Cat Man". Soon after Dog Man tries on the helmet, Petey arrives to take Li'l Petey to get some gelato. He notices that Dog Man is wearing a cat disguise, and Li'l Petey explains why. Petey gives some advice just to not stick his tongue out, and don't roll in any dead fish. Dog Man heads to the police force, while Petey and Li'l Petey go get some gelato.

Chapter 5: A Buncha Stuff that Happened Next

Dog Man arrives at C.O.P.S, and the whole building has been flooded by tears. He finds Chief crying with a picture of him, and starts to grab it, then rips it. The helmet pops off, and Chief worries that the mayor will see him. Suddenly, the mayor comes, and Chief quickly puts the helmet back on. The mayor asks if he's found a replacement for Dog Man. Chief is about to answer, but the mayor notices Dog Man disguised as a cat and decides to hire him. The mayor quickly runs off to tell Mr Snookums, and Chief exclaims "Oh boy, this is gonna be great!" Meanwhile, Petey tells Li'l Petey that he wants to work on a robot with him, but Li'l Petey says he has a comic club meeting. Petey feels dismayed, and Li'l Petey asks why they can't visit Grampa, and Li'l Petey just asks "Why?", until Petey is fed up. Petey asks Li'l Petey not to spill his gelato on him, but it happens anyway. At Cat Jail, Grampa is happy to have found Big Jim's secret tunnel. He asks Big Jim for the Motorbrain, and he obeys. Grampa puts it on, and gets bigger, bigger, until he is Crud.

Petey's Father runs out of the tunnel and starts smashing buildings and terrorizing the city. Meanwhile, Petey is angry at Li'l Petey for spilling the gelato on him. He rinses himself off and says he forgives Li'l Petey though Grampa doesn't deserve forgiveness. However, Li'l Petey says he forgave him a long time ago, tormenting Petey. Petey blabs about how Grampa doesn't deserve forgiveness, until Li'l Petey changes the subject to catching worms. Grampa has finished robbing a bank, and Sarah Hatoff interviews him, asking how it feels. Grampa says he likes it, but feels lonely and wants a sidekick. Chief and Dog Man see the report through the television at the cops station and decide that Dog Man should go undercover as Grampa's evil cat buddy.

Meanwhile, Li'l Petey is still asking why, and he answers that sometimes you have to hate people for it. He says that sometimes hate is all you have left. Li'l Petey asks about love, but Petey thinks it is only for happy people like Li'l Petey. He says that Grampa was really mean to him, and was meaner to his mom. Li'l Petey asks about his Gramma, but Petey doesn't answer, and instead asks Li'l Petey to eat his food. Meanwhile, Sarah is still interviewing Grampa until Dog Man comes, disguised as Cat Man. Grampa is filled with joy, grabs Dog Man, then stops at a bookstore to smash. Dog Man then ties Grampa's tail to a fire hydrant and cuffs him. The mayor is watching the news report and tells Mr. Snookums how he hired "Cat Man", and how he's the greatest. Crud gets angry that he's been captured, and throws Dog Man. Dog Man's helmet falls off, and the mayor and Sarah now know his true identity. Sarah wants to helps him, while the mayor runs out of his house, wanting to destroy him.

Back at Petey and Son, Li'l Petey is asking why he's never met his Gramma. Petey tells him that Grampa abandoned him when he was a kitten, and his mom was sick when he left. Li'l Petey asks if she got better, but he does not answer. He says sometimes all you've got is hate left in you for someone. Li'l Petey answers "Hate has caused a lot of problems in this world, but it hasn't solved one yet". Meanwhile, Grampa is about to destroy Dog Man, but Sarah jumps in to stop Grampa. They both start attacking Grampa, and Chief joins in. The mayor comes outraged that they are helping Dog Man, and orders the cops to arrest them. The cops cuff all of them, but they let Grampa get away, and the mayor says it's their fault because they helped Dog Man. They are loaded into a cop truck, are driven away, but the cops left the mayor behind. Grampa runs to find a gift shop selling living spray, with a giant lunch bag on display. This gives Grampa an idea...

Chapter 9: The Lunch Bag of Motorbrain

Grampa decides to spray living spray on the lunch bag, making it come to life as "Munchy". Munchy starts smashing buildings, but gets thirsty. He starts to drink nuclear juice, but Grampa warns him to stop, or it could give him a stomach ache. Munchy starts to run to the pond, where Flippy is teaching the 21 frogs and the one tadpole (Molly) about adverbs. One of the frogs named Melvin (a know-it-all) keeps on answering the questions, until all the frogs start to run away. Flippy is grabbed by Munchy, while the frogs and one tadpole hide in the grass.

80-HD is watching TV at home and discover that Munchy is on the loose, and the good guys are heading to jail. 80-HD flies to Petey and Son, and crashes through the wall. He puts on a stop motion show for Petey and Li'l Petey about the situation, and they crash out through the wall. Petey gets angry that 80-HD didn't use the door, so 80-HD crashes through the wall again, and goes out the door. They arrive at the pond meeting Molly, and Li'l Petey decides to get out the Superhero costumes. Petey says that Li'l Petey uses love when everything's well, but when there's danger you can only fight hate with hate. Li'l Petey doesn't know if he's right or wrong, but he decides to find out.

Molly, 80-HD and Li'l Petey all think of what they love. They all agree they love to draw. Molly shows them how to draw a squid on Munchy's butt, and soon Li'l Petey and 80-HD join in. Munchy finds out and feels embarrassed that he has drawings on his butt, dropping Flippy, who calls out the frogs. All the frogs join in drawing the things that they love on Munchy. Soon Munchy is covered with drawings and runs away in embarrassment. Petey decides that "Love got lucky". Suddenly Grampa comes with the cop truck, and Li'l Petey tells Petey that it's his battle to fight.

Petey is hesitant that he can do it. Li'l Petey answers "It's your story, Papa. You can color it any way you want." Grampa throws the truck, and Flippy and Molly fly to catch it, while Big Jim searches for Grampa. Petey exclaims he can't do it, but Li'l Petey says he doesn't have to. Petey tells Grampa that he's done hating him, and he forgives him, Petey starts to walk away, while Grampa takes the helmet off and shouts at Petey to come back. Petey walks Li'l Petey back while Dog Man and the cops are saved by Flippy and Molly.

Grampa is angry that Petey didn't fight, and kicks the motorbrain away. The motorbrain lands near Big Jim, and he puts back on, and becomes Snug. Big Jim starts to chase Grampa so he can cuddle with him.

Petey and Li'l Petey arrive home, but Petey only walks in and gets some flowers. They walk until they get to a gravestone. Petey says he hadn't been there since he was a kid. Li'l Petey asks if his Gramma is in the gravestone. Petey says that she's in his heart, and in Li'l Petey's heart. A leaf falls into Li'l Petey's hand, and he asks if his Gramma is in there. Petey replies "Well... It's your story, kid. You can color it any way you want." 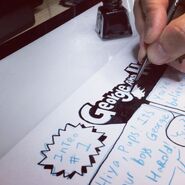 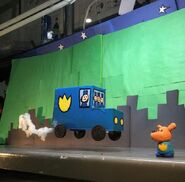 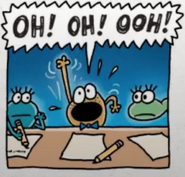 Dav Pilkey's Dog Man is back! Part dog, part man, and all hero! This time, Dog Man's digging drives the meanie mayor mad! Luckily, the Supa Buddies gave the purr-fect plan to help the hound! But their plan backfires when Grampa turns into the crazed Crud, a giant lunch bag comes to life, and the mayor sends the good guys to jail! Now, it's Petey's story to tell as he faces his own father to save his frenemies!

Dog Man's really done it this time! He hands over his badge and clears out his desk, but while he may be out of a job, he's not yet out of hope. With his friends at his side, can Dog Man dig himself out of this hole and paw his way back onto the force?