Dog Man: For Whom the Ball Rolls

For Whom the Ball Rolls

Dog Man For Whom the Ball Rolls is the 7th book in the Dog Man series. It was written and illustrated by Dav Pilkey and Jose Garibaldi. It was released on August 13th, 2019.

Chapter 1: Rise of the Planet of the Cats

Petey is sleeping on an early morning, when he is interrupted by Big Jim, yelling “Petey! You gotta see this!” The news is on TV, where Sarah was thanking the Supa Buddies AND Petey for their heroic bravery during the fire in Brawl of the Wild. Big Jim hugs Petey, when Petey tells him that heroes don’t snuggle. The 7 dogs that were in Dog Jail were also pardoned. Big Jim thinks it is nice, but Petey is the exact polar opposite! Petey says that “ Those dogs are free—— but I’m still locked up! Where’s my pardon?” The other cats, including Big jim agree with him. Petey states that the cats should unite, and they form a revolution! Meanwhile, Chief and Dog Man are chasing a bad guy, until Chief starts to get exhausted. Now only Dog Man is running, when the criminal runs into a dead end. He surrenders, but then takes a ball (one of Dog Man’s obsessions) out of his shirt, and overjoys Dog Man by keeping the ball in his hand, and then throws it. But before he flips it, a Flip-O-Rama occurs. After the Flip-O-Rama, the criminal finally throws the ball, and Dog Man starts running! He runs into Chief, and knocks every piece of his police uniform (except his pants and tank top). He gets angry, and tells Dog Man to go home.

Chapter 3: To Heck with the Planet of the Cats

While Petey was saying that no animal has more liberty than the cat and they must unite, Piggy, Crunky and Bub were in Petey's whisker and crunky and bub says they are all tired of being so tiny. Piggy askes them to stop whining, but bub says every since we joined the fleas, it's been one disaster after another. But Piggy says they can't quit, he got a new plan that if they can reach petey's ear, he could hypnotize him. But Bub and Crunky says how about a pizza, then a cheeseburger, than a big bag of minature marshmallows, then a CHOCOLATE CUPCAKE WITH SPRINKLES! But Piggy says they can't mold a cat into a chocolate cupcake with sprinkles. They said We can try! Piggy says CAN NOT! and NO YOU CAN'T! Petey continues talking until the warden says he is free. But big jim hugs him and then petey gets mad about big jim snuggling with him. After that, petey had fun with his new life after big jim says bye. Then, Bub, Crunky, and Piggy get stuck on a cat's whisker, Luckily, Crunky holded on the edge of Big jim's whisker.

Chapter 5: A Good Dose of Reality

Chapter 6: A Buncha Stuff That Happened Next

Chapter 7: Guess Who's Coming to Breakfast!

Chapter 8: The Old Man and the Seafood Crackers

Chapter 12: A Farewell to Arms

Chapter 14: The Mud and the Stars 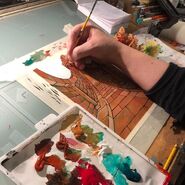 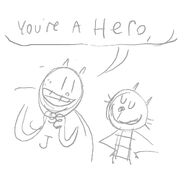 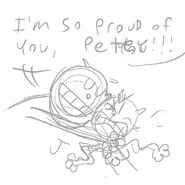 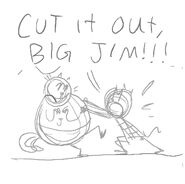 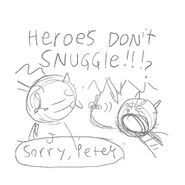 Dav Pilkey's Dog Man is back! Part dog, part man, all hero! It's a whole new ball game when the heroic hound's former obsession becomes his greatest fear! Will the devious Dr. Scum destroy Dog Man with a bunch of Burgle Balls? And what will happen when Petey's pop comes in and a sugary superhero shows up? Can the Supa Buddies save the day? One thing's for sure. This time it's not enough for the friends to be good, they also have to do good!