Dog Man Wiki
Register
Don't have an account?
Sign In
Advertisement
in: Books, Tree House Comix, Inc., Books not in the main series,
and 7 more

Li'l Petey, Flippy, and Molly introduce twenty-one rambunctious, funny, and talented baby frogs to the art of comic making. As the story unwinds with mishaps and hilarity, readers get to see the progress, mistakes, and improvements that come with practice and persistence.

Cat Kid has a comic club! But the frogs get silly and fight. Soon things get out of hand when they quit, and Flippy starts getting to strict! Nurse Lady solves that, but will Flippy encourage his silly kids?

Li’l Petey and the frogs are in a Cat Kid Comic Club meeting, and Li’l Petey is the President and Molly is the Vice President. Melvin says he’s the senior Vice President, and the frogs decide to make their own silly ranks. Corky says she’s the boss of all of them, and Starla says that he’s fired. Corky cries, but Flippy soon breaks the tension. Li’l Petey asks them to write down what they like most. Melvin writes down what he loves, and Li’l Petey likes Melvin’s approach. Melvin makes a comic a about a toothbrush named Dennis who wants to be a lawyer for Dinosaurs

Comic 1: Dennis the Toothbrush Who Wanted to Be a Dinosaur Lawyer

This comic is all about Dennis, a toothbrush who wants to become as a Dinosaur Lawyer, then it follows with "So... yeah." and ends the story.

Naomi criticizes Melvin for not having a story in his comic and calls it dumb. Flippy asks Naomi to apologize or she will have to go to the time-out rock. Naomi says she’s sorry that Melvin’s comic was dumb, and she is put on the time-out rock. The day is over, and Li’l Petey wonders if it will get any worse.

On Day 2, Li’l Petey asks if anyone worked on comics. Some frogs didn’t have any ideas, and other thought their comics were dumb. Starla and Summer hate it, and they decide to quit. Li’l Petey asks if they have any other things they like. Starla likes poetry and Summer likes photography. Li’l Petey says that they can also make comics with those materials. Starla and Summer leave excited, while Li’l Petey and Molly go back to the meeting. Molly punishes the frogs for not making comics and calls them 'fraidy frogs. Lil Petey encourages the frogs if they can’t think of good things, think of dumb things and fail. The frogs agree, and leave to work on their new dumb comics.

On Day 3, Molly asks the frogs if they made comics last night that seem bad. In response, Poppy showed her comic (The Cute, Little, Fluffy Cloud of Death) and so did K.T (Supa Fail). Pedro also showed his comic, claiming he made an embarrassment not just to him, but others. Li'l Petey then asks the frogs who would like to go first. Pink showed his comic (Monster Cheese Sandwich) last, saying he and his team would like to go first.

Poppy tells Pink that it was awesome, but then Kip says that since he didn't make a bad comic, he failed at failing, much to the disappointment of Pink. Flippy says the book was good, but he didn't like the violent ending. Lil' Petey asks who wants to go next, and Pedro says he does.

The comic starts off with Pedro and his big, awesome dog. It was shown the dog can fly, but its unknown how. The dog also poops big poops, but Pedro doesn't need to clean the poop up. Later one time, two ninjas set out to kill the world, but they landed on one of the poops from Pedro's dog. The ninjas went home because of the poops on their shoe. This proved that the dog saved the world. In reality, Pedro doesn't have a dog, but he wishes to get one if he is good.

The other frogs and Flippy say that they really like the book, but Flippy says the potty humor wasn't necessary. When a frog asks why, Flippy says that there is nothing funny about poo-poo, causing all the frogs to laugh. Flippy asks if anyone made a comic that wasn't violent or disgusting, and K.T. responds, saying their comic is free of offensiveness.

The comic starts in the hospital. The nurse gives a birthday cake to the newborn baby. The nurse asks the mom what would she name it, and the Mom says, Supa Fail. Suddenly, Supa Fail throws the candle out of the window, causing Joe's Dynamite Company to explode. The trio gets launched into the air, and lands on some pillows. Supa Fail's Mom tells her son that one day he'll be a superhero. Out of nowhere, there was a call for help. A old lady was running away with toothpicks. Then the owner tells Supa Fail that the old lady took two toothpicks, but the limit was one. Supa Fail chases after the old lady, but she tries to escape by car. Supa Fail ties the car to the restaurant, but unfortunately it tore down the building, then causing a domino effect to nearby buildings. Fortunately, the car gets stuck and the lady is out of escape plans. Supa Fail decides to help the old lady by cutting the rope, sending her flying to a nuclear bomb factory, causing Earth to explode. The owner of the restaurant congratulates Supa Fail sarcastically by telling him that he caused the world to explode. But fortunately, the old lady was nowhere to be seen. So technically Supa Fail won.

The comic starts off with a cute little cloud. She was fluffy and dead. The sun was mean to the little cloud, and tells her that she is creepy. The little cloud gets sad and starts to cry. Her tears watered the dead flowers, the Skelopup (skeleton puppy) was hydrated, and Ghost Girl and Skeleton Boy were having fun in the puddles. They all cheer for the little cloud, saying "thank you for the nice rain!" and they become friends. But then, the sun suddenly appears and starts to insult the little cloud and her new friends. Ghost girl tells everyone that just ignore the sun and it'll go away. And it worked. Soon, the moon and stars came out, and they played under the moon!

After Flippy finishes listening to the baby frogs' stories, he gets angry and starts lecturing about the comic being too immature. Unfortunately, the baby frogs run out of ideas. Raine and Corky get sad because they couldn't finish their comic, then Flippy has a look at their comic. The name was Frankenbarf vs. the bionic barf bunnies from diarrhea land. So he says they couldn't finish their comic because it was immature. Flippy then soon tells everyone that their comics must be wholesome, uplifting and with good values, morals, integrity and upright virtue. The tadpoles get bored and immediately leave. With an empty audience, Flippy tells them that they should have purity, honor and ethics. Then he realizes that the tadpoles have left.

Flippy called the doctor and nurse lady and they were on their way to the trailer. Flippy told them the frogs are in the bowling ally, They read the comics, and they loved'em!

Flippy got told that he needs to be more chill.

Chapter 6: King of the Chill

Comic 6: Dennis the Toothbrush Who Wanted to Be a Dinosaur Lawyer 2: Cretaceous Courtroom

2 frogs are still at a session. Flippy asks why they are still here and they say that they need inspiration for a story and Flippy says that they don't deserve inspiration. Flippy advices them to force themselves to create and the 2 frogs say they're aren't good at writing. Flippy tells them to make an biograhical story. The 2 frogs then have an idea to make an autobiographical story about Flippy. Flippy tells them they can't make a story about him. One frog then asks why and the other replies "Because he doesn't drive a car." Flippy then denies this answer. A frog requests Flippy to tell the frog all about his life. Flippy then continues to tell the frogs.

Chapter 8: The Show and Tell Party

In Li'l Petey and Molly's comic, Squid Kid is peculiar from the others and layed him off, while on the distant side, Katydid has a different thought than the others, which lets her cry. Together, these misfits met each other and their lives changed over their friendship.

Baby Flippy is the smallest fish among others in the sea, who was bullied by the sea creatures, drifted in the ocean, and they let him alone. He faces his courage along the way on his journey.

A man named Chubbs McSpiderbutt accidentally sat down on a flying spider named Jake. The spider's venom had turned Chubbs' human legs into spider legs that shocked him. Jake apologized him for what he done to Chubbs. And they went on to be superheroes.

Three baby frogs attended the police academy where they study, learning the art of Kung-Fu, and enforcing traffic at the road, until they got tired doing these. One time, a baby frog had an idea, so they worked immediately on the spaceship and flew to save the universe. On their way to Planet #39, the computer alerted with an incoming bully scaring a friend, and the baby frogs bravely facing him to halt their fight.

Behind the Scenes Footage 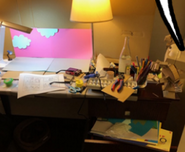 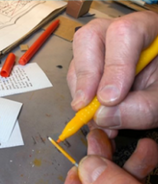 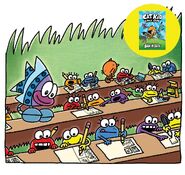