Li'l Petey, Molly, Flippy, and twenty-one rambunctious baby frogs are back for another creative adventure! Cat Kid Comic Club is back in session in this dynamic and original graphic novel by Dav Pilkey, the author and illustrator of Dog Man and Captain Underpants!

Flippy, Molly, and Li'l Petey have new lessons planned for Melvin, Naomi, and their nineteen siblings. The baby frogs have a lot to learn -- both inside and outside of class. Will they figure out how to work together and see things from one another's point of view?

The shenanigans are nonstop and the comics are thoughtful, funny, and full of heart. Author and illustrator Dav Pilkey uses an assortment of art techniques to illustrate his trademark humour in this joyful graphic novel adventure that fosters creativity, independence, and empathy.

Cat Kid Comic Club is back in session in this groundbreaking graphic novel narrative by Dav Pilkey, the worldwide bestselling and award-winning author and illustrator of Dog Man.

Flippy, Molly, Li'l Petey, and twenty-one baby frogs each have something to say. Naomi and Melvin don't see eye to eye and Poppy perceives the world differently than her siblings. Will the baby frogs figure out how to work together and appreciate one another's point of view -- both inside and outside the classroom?

The shenanigans are nonstop and the baby frogs' minicomics are funny and full of heart. Creating stories within a story, author and illustrator Dav Pilkey uses a variety of techniques -- including acrylic paints, colored pencils, Japanese calligraphy, photography, collage, gouache, watercolors, and much more -- to portray each frog's perspective. The kaleidoscope of art styles, paired with Pilkey's trademark storytelling and humor, fosters creativity, collaboration, independence, and empathy. Readers of all ages will relish this joyful graphic novel adventure.

The second week of the comic club starts. And everyone keeps goofing around. LP and Molly teach them how to make bubble letters, as well as 3D name logos. Naomi causes trouble and she ends up in the Time-Out Rock. Melvin and Raine switch seats. Molly and LP acknowledges that they have to start the day over the next day because they were a bunch of time wasters. Curly and Gilbert make a comic idea based around the words Time Wasters.

The second day of the second week of the comic club starts off with everyone goofing around and Naomi and Melvin fighting. Curly and Gilbert shares their new comic to everyone, and The H.A.C.K.E.R. Brothers present their long-awaited comic, Chubbs McSpiderbutt.

Felix and Jax are given an assignment to make an essay about the Great Chicago Fire. They use a Time Portal to go back in time to prevent the Great Chicago Fire from starting. But they soon get distracted and start playing video games. But then, they realize that they have no Wi-Fi. So, they leave quickly to save the game's progress...

They return to school the next day, and give their report to their teacher. AND they get an F...

Chubbs steps on Jake the Spider. Then the venom transforms Chubbs' butt into a Spiderbutt. Then they decide to become superheroes and build a cool van. They soon encounter the Not Very Nice Club. The leader taunts them continuously, while unsuccessfully training his mentee to be unkind.

Continuing with the chapter, Naomi asks the H.A.C.K.E.R. Brothers if she could join them, but they decline her request. Melvin requests Flippy to go back to his former seat, and Flippy unhappily puts him back in his seat.

The third day of the week begins as K.T., Kip, and Curly show off the long-awaited sequel to Supa Fail.

Melvin and Flippy have a talk in the Time-Out Rock area. Melvin begs Flippy to not sit on the rock because he has a clean and obedient record. Flippy prompts him to make a kind comic about Naomi, and Melvin gets heated.

Chapter 5: The Next Day

Melvin makes a cover of Naomi and they both walk to the comic club.

Melvin and Naomi were apparently late, and Poppy had to read out her new book twice.

Skelopup comes to life after his old body decays underground. Then, the Cloud of Death takes him to Deadville. Skelopup meets Ghost Girl, and they have fun together. The End...

Note: Flippy and Raine talked about the ending of this book, and they both finalized the book as a story based on Flippy's story. This comic is not a fully accurate biography.

After being bullied by bigger fish, Flippy went home crying. When he got home, Flippy's mom encouraged him. But as he got older, he got trapped in a pot with a squid, and was almost eaten. But they both escaped...

UNTIL a shark appeared out of nowhere, and lightning zapped Flippy's captor...

Wendy and Raine's siblings are mad that the book ended in a cliffhanger, and that its sequel won't be showcased until the following week.

Summer shows the club how to draw Japanese words.

Rico and Drake asks Molly if the Show and Tell party would be happening the next day. But Molly confirms that it won't happen, since the frogs were goofing around a lot. They blame Melvin and Naomi for the cause.

Naomi and Melvin go to a flea market, as Naomi needs inspiration. A guy invites Melvin to play a game, and thinks Naomi will lose. But Naomi knocks him out and expresses her emotions to Melvin. She tells him that life is unfair to her and other girls. Melvin starts to see things from her perspective and gets an idea for his punishment comic.

Chapter 8: The Saddest Friday of All Time

The baby frogs blame Naomi and Melvin for all their mistakes throughout the past week, but Flippy blames it all on himself. They all try to comfort him using comics.

The authors of Baby Frog Squad hype their comic up.

Frankie, C.C., and Boo used to work as Law Enforcers. But they changed their minds and became space heroes. They detect a bully on a planet, and try to stop the bully. But the bully ejects an evil robot out of his body. The baby frogs turn the robot into a good robot, and they prompt him to hug the bully. The bully runs away, and the victim is saved.

Flippy and the baby frogs are now happier, and one of them exclaims, "This chapter's title was way off!"

Chapter 9: Naomi and Melvin Redeem Themselves (Sort Of)

The frogs meet up with Naomi and Melvin, as they are ready to share their comics.

Melvin writes a comic all about his sister, Naomi and her perspective.

Naomi hugs Melvin for the first time, because the comic touched her heart. Naomi dethrones Kip as her favourite brother, and enthrones Melvin instead. Naomi then showcases her comic...

Comic Preview: The Under Werewolves

Two werewolves and their grandma go to a fashion show to stop a quarrel.

The H.A.C.K.E.R. Brothers were intrigued by Naomi's comic, and they ask her to join the group. But Melvin takes over her decisions and declares that he will protect Naomi at all times. The two siblings start saying that they'll crush those who go against them, and they start laughing menacingly...

Can Naomi and Melvin remain besties? Will Flippy ever stop worrying? And WHO are the special guest stars dashing forth to investigate the comic club? Find out next time in Cat Kid Comic Club: On Purpose!!! 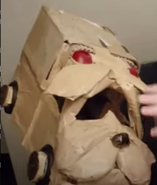 This Dogmobile could appear in CKCC 3, since it was teased for CKCC 2—but it never showed up...

Hey Kids Comics Behind the Scenes[7]

Other Photos From Other Sources

The Baby Frogs and their cars[8]

Dav Pilkey Working in his Studio[9] 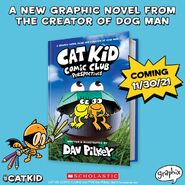 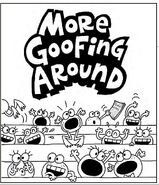 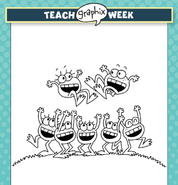