Dog Man Wikia
Register
Don't have an account?
Sign In
Advertisement
in: Article stubs, Characters, Lord Of The Fleas Characters,
and 16 more

This article is a stub. You can help Dog Man Wiki, fix the page, and then delete this template when you're done!

Black with no irises

unknown
Bub is a secondary antagonist. He is a member of the F.L.E.A.S., as Piggy's Flunky #2. In George and Harold's world, his name is fellow buddy in slang.

Bub is a short, stubby light green crocodile with two buck teeth. He has a long tail.

Bub, along with Crunky, is Piggy's servant. When he serves Piggy he is shown to express hate towards him, such as when he told Big Jim to get rid of Piggy saying that he's a speck of dirt in his left ear and that he should get rid of it.

Bub also likes hanging out with Lil' Petey as shown in Lord of the Fleas, where Lil' Petey asked if he and Crunky wanted to go catch fireflies, with both of them agreeing without hesitation. 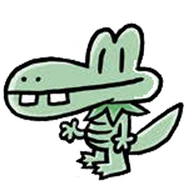 Bub in Lord of The Fleas.